In the opening to Sarah’s memoir, “Motherhood Reimagined,” she states:

“Like many women, I spent my late twenties and early thirties climbing the corporate ladder, kicking ass in my career. I worked hard – like sixty to eighty hours a week hard – and played hard, and I loved every minute of it. When a stress-related illness sideswiped my body and sidelined my career, I transformed myself from a corporate lawyer to a life coach, Quigong teacher, and healer. Back then, when people asked me (as they so often do ask women in their thirties) if I planned to have children, I waved them off. Maybe. Someday. I’m not sure.”

Time passed, and Sarah woke up in her late thirties without a partner and “longing for a baby.” She also became aware that if she were going to have a baby, she would have to do it on her own.

We caught up with Sarah, who now has a 4-year-old son, to find out more about her path to single motherhood:

The most surprising thing about my journey was how many things did not go according to plan. By the end, I felt like an expert in letting things go and learning not only to accept but to embrace a different, unexpected outcome.

When did you decide to become a ‘Single Mother By Choice’ and why?

Deciding to become a Single Mother by Choice was a long process. It wasn’t a choice I made quickly or lightly.

Around the time of my 39th birthday, a mentor asked if I had considered whether I wanted to have kids or not. Because I’d been focused on my career, personal development and dating for the past several years, I was a little blindsided by the question. I’d been avoiding the question for much of my adult life. Although I’d been a baby-obsessed child, somewhere along the way, I’d lost touch with the desire to be a mother.

I fretted quite endlessly over concerns any woman on the fence about motherhood might contemplate—like, was I ready to give up a rather carefree spontaneous lifestyle to have a baby. But also about whether I could afford it or even handle it, if I did it alone. And most importantly, was I ready to give up on the dream I’d held since childhood—that having a baby would necessarily involve a dreamy husband.

Even though I was 39 when I started to ask myself the baby question, I was blissfully ignorant to the passage of time that was making my chances to conceive harder by the second. Instead I spent over a year anguishing over my options.

One by one, I worked through all the arguments against having a baby alone and eventually decided to use a sperm donor to conceive about a year after my mentor had asked the question. 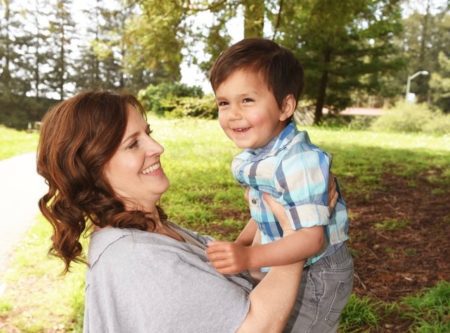 What surprised you most about your journey to single motherhood?

The most surprising thing about my journey was how many things did not go according to plan. By the end, I felt like an expert in letting things go and learning to not only accept but to embrace, a different, unexpected outcome.

People often describe me as tenacious and resourceful. I’m a master at figuring things out and making them happen. It’s rare that I haven’t been able to take charge of a situation and make something happen.

So, when my OB/GYN declared me infertile, advising me to use donor eggs if I wanted to get pregnant, before I’d even begun trying, I was completely devastated.

I had assumed that I had time to pursue my career, live an interesting life and get pregnant when I was ready. I didn’t know much about modern reproductive medicine, but I assumed it would be there for me if I needed, erasing away any concerns I had about getting pregnant just after turning 40. I couldn’t have been more wrong.

As I sat in my OB/GYN’s office after she gave me the news, I felt so far removed from the vision I’d had for my life. Here I was, not only being forced to use a sperm donor instead of a partner; but now, I was being forced to give up on my own genetic link to a baby. It felt like a big cosmic joke.

Even though a few months prior, I hadn’t been certain I even wanted a baby, now that I’d reconnected to that yearning, I knew I had to be a mother, no matter what it would take. And so began a year of painful lessons in letting go and adjusting expectations.

In time, I eventually relinquished a sense of control and gratefully embraced the opportunity to use both an egg and a sperm donor to get pregnant and give birth to my now 4-year old son.

People often assume that women who end up having kids on their own either didn’t try hard enough to find a partner, or actually didn’t want a partner. But that’s usually far from true.

In your opinion, what are some misconceptions people have about women who decide to have children on their own?

In more conservative pockets of the country, some people take issue with a woman having a child on her own without a father for the child. They are concerned about whether women can afford it financially without becoming a drain on public resources. But more and more, single moms by choice are accepted as responsible, financially independent women who carefully and thoughtfully planned to have a child alone.

Research is on our side, with plenty of studies finding that having one stable loving parent is the most important factor in a child’s well-being, not any particular family structure.

People often assume that women who end up having kids on their own either didn’t try hard enough to find a partner, or actually didn’t want a partner. But that’s usually far from true.

Even for some women, the term “Single Mom by Choice” itself feels inaccurate because single motherhood is not their first choice—they wanted a partner and the white picket fence but given that fertility is finite, they had to make the hard choice to pursue motherhood before they ran out of time. They were simply not willing to give up on the dream of motherhood when life failed to unfold as planned and bring a partner first.

What advice would you have given yourself now that you’re on the ‘other side’ of your infertility journey with your son?

If I could give myself any advice it would be don’t sweat the details. Motherhood, no matter what form it comes, is more rewarding than anyone can imagine.

I fought really hard to use my own eggs even when the odds were dismal. I was horribly afraid of using donor eggs because I thought the genetic connection was integral to my vision of motherhood. Now that I’m a mother, that couldn’t be farther from the truth. I wish I had known how little it would matter and how much I would love my son regardless of how he came into being. Although everyone on this journey has to find their own process of letting go, if I could have looked into a crystal ball at my life now, I would have jumped at the first opportunity I had to use donor eggs because it is such an insignificant piece of our story now.

Anything else you want to share with single women or men who are going through fertility treatments to become a parent?

Infertility can ignite incredible sadness, rage and self-hatred. Try not to blame yourself for any missteps or choices you’ve made along the way. Use the process as a practice of learning self-love.

Stay open to all the options made possible through donor eggs, surrogacy, and adoption. There are so many ways to become a mother and even if they feel undesirable, even heart breaking at first, once you hold your baby in your arms, you’ll wonder why you ever questioned it.

My Sister and I Both Had Sons, but Mine Didn’t Survive: How We Repaired Our Relationship and Turned Pain into Advocacy

The Infertility Gamble: Go For Broke or Choose When to Walk Away?