When Athena Reich was in her mid-30s she did ‘what any clock-ticking lesbian would do’ and she bought herself some sperm. She didn’t know at the time that she’d also embark on a windy and painful infertility journey in her effort to conceive a child with this sperm.

You may remember Athena from the documentary ‘Vegas Baby’, where her IVF experience was profiled, or know her from her vlog “Baby Steps”, or you may recognize her from her work as a Lady Gaga Impersonator. (Her #artbirth show, in which she plays a pregnant Lady Gaga, got great reviews recently in Toronto. Hard to forget this one if you came across it!)

We sat down with this dynamic and inspiring artist to learn what it was like to use a donor egg and donor sperm and why coming out as infertile was harder for her than coming out as gay.

You’ve been pretty ‘out’ about your experience with infertility. Why has that been important to you?

As a queer woman I know first-hand that being closeted serves no one. Infertility is painful enough without adding the shame of isolation. It’s easy to believe that silence will protect you, but in my experience it only intensifies feelings of hopelessness and frustration. Our culture perpetuates the idea that anyone can have children well into their 40’s, and that if you just relax/pray/eat-enough-kale all will be well. My suffering was increased in large part due to false expectations so I want to change perceptions. Also, once you start talking about infertility, it’s amazing how many others are also suffering in silence. It’s an epidemic! I would rather wear my heart on my sleeve and connect with community, than hide in my struggle alone.

In the film Vegas Baby, you said that ‘coming out’ as a lesbian was easier for you than coming out as someone who had infertility. Why do you think that was the case?

In “Vegas Baby”, my exact words were, “For me, it was easier to come out as a lesbian than coming out as having infertility issues”. When I saw the first cut of the film my immediate concern was that my personal context would get lost. For many people around the world, coming out as LGBTQI is life threatening, sad or just plain hurtful. For me, growing up in a liberal community in Toronto, it was relatively easy. And, interestingly, a couple years after I came out, my Dad came out as well.

After announcing on social media that I have low ovarian reserve, I received a slew of ignorant advice and comments from both strangers and close friends. It reminded me of the way some of my queer friends and lovers had struggled with coming out. It’s especially difficult to filter through negative feedback when you are working through your own issues of shame.

Was I having trouble getting pregnant because I wasn’t feminine enough, didn’t deserve a baby, wasn’t thinking positively enough, or waited too long? I met many people in support groups who didn’t tell anyone about their infertility, and their feelings of isolation and shame seemed to echo those within the queer community.

You’re in a unique position in that you used a sperm donor and an egg donor. Did you look for different qualities in each?  What was important to you during this process of picking donors?

At first I was trying to get pregnant with my own eggs so I looked for a sperm donor whose traits would compliment mine. For example, I’m artistic so I thought someone with an academic background would be a good compliment. When I moved to egg donor, I looked for two donors who would compliment each other, but still fit in with my family. Past pregnancies and familial health (both physical and mental) were of utmost importance to me, but after that I selected donors who were smart, creative, and happy (I’ve heard that happiness is apparently 50% genetic). I also wanted to find donors who were attractive in a way that fit in with my family – as if they could be cousins.

Everyone comments on how much my son looks like me because of his big blue eyes and there is no doubt he is mine. At age 2, he is advanced both verbally and physically and has a zest for life that fits right in with the passionate personalities in my family. People always remark on how happy he is. I attribute some of these qualities to his donors, some to epigenetics and a good portion to nurture.

What’s a misconception people have about infertility, in your opinion?

I think it comes down to people’s fears about aging and disease. All of my 30-40 something peers would like to believe they are still fertile. If they acknowledge that my eggs are old, it opens them up to the possibility that their own biological clocks may have ticked. To this day some friends tell me to try again with my own eggs even though there is a minimal chance it would work.

The more likely scenario is that I would be putting myself through more trauma and losses. We need to start hearing stories from people who tried EVERYTHING and still did not succeed. For some reason, (probably due to the shame and silence) that news does not travel fast and we keep hearing stories about the 46-year-old who is pregnant with twins or the 49-year-old who gets a surprise third child. We are all vulnerable to disease and aging, but it’s terrifying to acknowledge that.

I am no longer bothered by the fact that I have low ovarian reserve because I now have, what I believe to be, the most perfect child in the world.

I am no longer bothered by the fact that I have low ovarian reserve because I now have, what I believe to be, the most perfect child in the world. I had a great time developing my career before I started my family but who knows if trying to get pregnant earlier would have worked? I am, however, grateful that I have a fertile womb that can carry an embryo. We must celebrate the positive and I cannot think of anything more positive than having survived the darkness of infertility only to emerge with a beautiful, happy and healthy child.

Where are you now in your ‘fertility journey’?

I have an embryo on ice (same egg and sperm) that I am considering implanting in the New Year. Since I’m a good carrier and it’s a grade A egg, it has a 75% chance of success, as all young healthy embryos do. If that doesn’t work, I will move forward with a new egg donor since I no longer have access to the original female donor. I recently purchased a vial of sperm from the original male donor, so I would combine that with the new eggs. I don’t feel worried because I now know that, for me, the issue was egg quality and my chances with donor egg are extremely high. 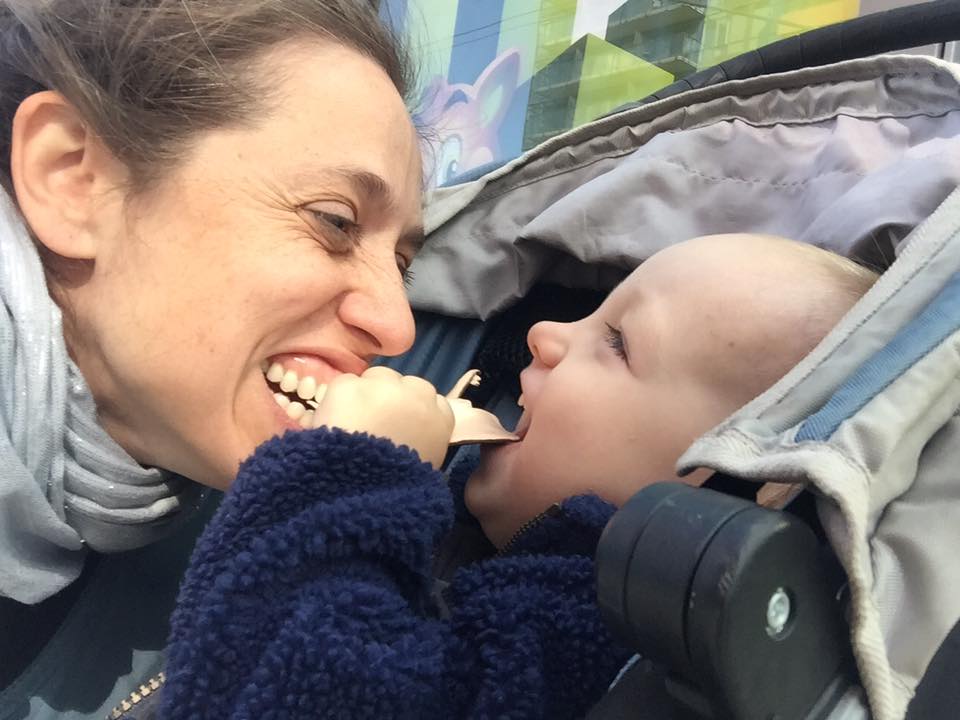 I would like to add: If you are reading this and struggling with infertility, I hope my story inspires you. If you stay flexible and explore all options (from IVF to egg donation to adoption), you will get your baby. And in the end, you really do fall completely in love with the baby that’s placed in your arms. Really.