Jay and his wife Tiffany started trying to have kids right after they got married at 37 years old. After more than two years trying to conceive, they gave birth to their daughter in 2012.

According to Jay, “I thought we had climbed a mountain that day, but little did I know what was yet to come…”

As Jay and Tiffany decided to expand their family and underwent painful rounds of “IVF after IVF,” they discovered that pursuing surrogacy in the Ukraine was a viable option for them. Little did they know what they were getting into — which inspired Jay to recently launch his blog Flip Flops in Kiev to capture their experience making babies overseas and to share what men go through during the infertility and family-building experience.

I had gotten to the point where I internally accepted that we were going to have an only child; but my wife did not give up, even though she was the one having strange and powerful substances injected into her body and who had to endure the physical toll of all of this.

Finally, after a particularly difficult IVF cycle, we decided that enough was enough. I remember part of me was quietly relieved, as sad as I was. We looked into surrogacy, but found it to be cost-prohibitive if we did it in California. I was looking into adoption, but before I got far with that, my wife came to me with another idea…

From your perspective, how does infertility affect men and how did it affect you?

Dealing with infertility is a strange and complicated thing from a man’s perspective, in my opinion. We pay a price, but not nearly the price that the woman pays physically, hormonally or emotionally.

I always saw the role I needed to play, which is not really who I am naturally nor the role I generally play in our marriage, as the one who needed to be positive and optimistic that something would work out. My wife is that person in pretty much every other context in our life together.

She never said this out loud, but I know that she viewed this as something she didn’t succeed in completing. That’s just how she is. That’s not how any woman who goes through this should ever feel; but that DNA-level singular drive in her was a big reason we went through all of this in the first place. I felt helpless, as I would’ve given my right arm to remove the suffering she endured in order to put it on my shoulders. Her pain was the most painful thing I saw or experienced during this time, and it remains a visceral memory to this day.

Finally, when they tell you the odds of this or the percentage that X will happen, I suggest ignoring it. Every single thing that happened to us totally bucked the “odds” we were given. I can’t tell you how many times we heard we had something like an “80 percent chance we’d have a successful pregnancy” and then we’d lose it; and all of our kids faced very long odds based on the “so-called” numbers.

Every pregnancy attempt is either 0 percent or 100 percent successful. The rest is meaningless. They’ll get your hopes up when they shouldn’t. After a while, I told folks I wasn’t interested in hearing the odds.

What inspired you to start your blog Flip Flops in Kiev?

I’ve always loved to write. I write professionally and have been doing so for 15 years.

As my wife and I were going through all of this in Kiev last summer, I told myself every single day – and I mean EVERY SINGLE DAY – that I was living quite an incredible story, full of some bizarre and insane details.

Have you ever jumped into an Uber and felt a strange breeze as you were moving fast through a big city, only to look down and see the concrete passing underneath your feet because there were no floorboards in the car? I have. It happened in Kiev, and that’s one of the least strange things that happened to us. Have you ever very nearly caused an international incident when trying to pick up your wife’s lost baggage at the airport? I did. It happened in Kiev, but that’s too long a story for right now!

The blog is a way for me to get some shorter stories out there as I work on my book with the same title. In essence, I’ve always been a writer looking for a story to tell, and I don’t think I’ll ever experience one quite like this again. I have my story, the one I think was meant for me to tell; and I think it could help a lot of people as the number of folks who are considering different ways of having children rises.

How did you decide to pursue surrogacy in the Ukraine? What advice would you give yourself now that you didn’t know then?

My wife, ever the busy bee, found a fertility service based near Vancouver, British Columbia, where she is from and where her family still lives. When we were up there for Christmas a couple of years ago, we had lunch with the owner, who explained how all of this works. I remember that more than once as we got into the nitty gritty of what was to be done and where, my food nearly fell out of my mouth as my jaw dropped. Between the two of us, my wife and I had just about every continent in the world covered in terms of travel experience; but Ukraine might as well have been on the moon. Given the differences in our relative economies, though, the financials made more sense for us than pursuing this domestically, where we live (in California). 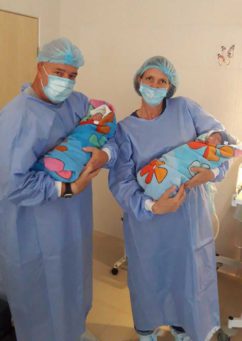 As far as advice I’d give myself now? Well, that’s an interesting question. I’m not sure there’s anything that could actually prepare me for what we experienced, as I don’t think there’s anything that can prepare someone for something as strange, intense, life-changing and rare. I guess I would tell myself to expect that life there is different in just about every way when compared to what we take for granted, and that as much as I think I know about things in general, I don’t know a whole lot. Not to mention, living in a place is a lot different than visiting it, and in this instance, we were living there. Therefore, I should drop any assumptions I have about people, how things work and ignore all of the “noise” that comes with having twins in Kiev. I’d tell myself: Focus on the goal and the result.

Anything else you want to add about your experience?

Yes.  I actually feel humility and gratitude saying this and I’m not being at all self-congratulatory, but I’d like to say that whatever we went through, whatever pain, sacrifice, struggle and fear we dealt with along the way, seeing our kids together now still reminds me that it was all more than worth it. I still tear up from time to time when I’m privileged enough to witness a particularly touching moment between the three of them, as how they became a family here is something I’ll never forget.

Our daughter will have siblings throughout her life, and my sons will have a big sister to lean on when they need her. Those are gifts that will continue to be present long after my wife and I are gone. So, as crazy as things were in Ukraine, in the end it’s a great story that contains a lot of important lessons for me. The bottom line is that we have a family now.

How Affirmations Helped My Fertility Journey