I Took a Job at Starbucks to Get Infertility Benefits

This is Christian Borrero-Colon’s story. He has been a Master Sergeant in the United States Air Force for almost 17 years. He works in security forces (military police), and has been stationed in Montana and Massachusetts and deployed overseas three times.

He has also been a Starbucks barista since August 2017.

Why? Because he has been dealing with male-factor infertility for many years and the expensive treatment that he needs is not covered by his military benefits. Now with secondary health insurance from Starbucks and more information, he hopes to finally get the treatment, and, then if all works out, proceed to IVF. It could help him and his partner finally have a child.

I’ve been trying to have a child (though not actively the whole time) since 2001, but I suspected that something might have been wrong as early as 1996.

That year, I had graduated high school and went for a physical to enter into the armed services but they medically disqualified me because they said I had only one testicle. I was disappointed because since I was a kid I had always wanted to be in the military.

In 1997, I went to a urologist who said that I did have two testicles but one was an un-distended. I got an official medical diagnosis and was cleared to join the air force.

In 2001, I was in a relationship and for the first time I actively tried to have a child, but it didn’t work. I went to a civilian urologist and the doctor ordered a semen analysis. The lab report indicated that no sperm was detected. At the time, I was told that there was no treatment. Even if there had been, infertility treatment is not covered by my benefits (unless the infertility was caused by my military service).

I was 23, and still fairly young, so I didn’t make it a priority. It was easier for me to just block out everything because I didn’t know how to process it. It was better not to think about it, or stress about it. I didn’t want to hear anyone tell me I couldn’t have children.

In 2007, my partner and I began looking into having a child again. I started over again and saw a urologist, who did a semen analysis, blood-work, and had an ultrasound done in the area. That’s when I was officially diagnosed with non-obstructive azoospermia. The doctor described this as my brain telling my testicles to produce sperm but the testicles for some reason are not executing on the order; they are not producing anything that shows on the semen analysis and not enough sperm to fertilize an egg. They said that there was no medication or treatments for my specific condition.

Again, I abandoned pursuing this further. I didn’t want to deal with it. It was better to hide it, bury it. I felt like there was nothing that they could do.

It was better not to think about it, or stress about it. I didn’t want to hear anyone tell me I couldn’t have children.In 2015, my best friend was telling me that new research and technology might help. (Few people knew about what I was going through.)

My partner was tested and cleared as a candidate for IVF. I went to Massachusetts General Hospital for another round of testing and was told that the Micro TESE (Testicular Sperm Extraction) procedure would be my only shot.

By this point, I knew the military would only cover diagnosis but we went as far as scheduling the surgery to see if by some chance it would be approved. It was not and an appeal was rejected as well.

I was told that the cost for the procedure and the related lab work to collect the sperm for fertilization could cost around $30,000. (Even if the costs could be negotiated lower, I couldn’t afford it.)

A Movie Can Change Your Life

In the summer of 2017, my partner and I were watching the documentary Vegas Baby [about a Las Vegas doctor’s contest, in which he provides a free round of IVF to the couple whose personal video wins the most votes] and it affected me deeply. At first, I didn’t want to watch it, because it hurts…but my partner convinced me to watch it because maybe we could get something out of it. 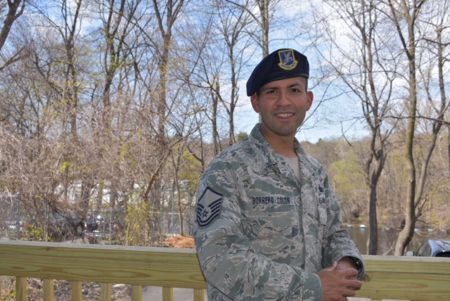 Afterward, I felt good that I wasn’t alone and obviously the support from my partner helped so much. She wants this for us and she’s willing to do anything to make sure that it happens.

Around the time we watched the documentary, my dad was diagnosed with ALS [a degenerative neurological disease]. I now had added motivation because I became aware that if I was going to give him a grandchild, I needed to try to expedite this somehow because I didn’t know how much longer he had.

After we watched the documentary, my partner then read a story online that Starbucks offers IVF/health benefits for part-time employees.

The next day I went online and applied for a job. When I sat down with the manager for the interview, she asked, “Why Starbucks?” I felt it was natural to tell her the truth: “I want to work here because you offer health benefits that can help get me the surgery I need.”

I started working for Starbucks in August 2017. I’m a barista at the store in Ludlow, MA.

For the benefits, I have to work at least 480 hours within a six-month period and as of May 1, I qualified for health benefits. I have benefit deductions taken out of every paycheck and there’s a deductible and minimum charges I must pay, but it all seems more manageable. (From what I understand, Starbucks covers $20,000 for IVF.)

The way that I look at it is, I don’t have a choice about the two jobs. I like working for Starbucks and enjoy working with the people there. But it takes a toll. If I didn’t have the medical necessity, I wouldn’t work there. But I can’t postpone this any longer. It’s now or never.

It’s hard to explain to others who don’t know what you’re going through how it affects your life.

But, since I saw Vegas Baby, it has made me open up more to tell my story. Before, I felt embarrassment. I felt I wasn’t normal. These are still feelings I deal with. “Why me? What did I do wrong?”

When I sat down with the manager for the interview, she asked, ‘Why Starbucks?’ I felt it was natural to tell her the truth: “I want to work here because you offer health benefits that can help get me the surgery I need.These questions still linger, and I deal with it through partner support and counseling and by opening up to talk about it; it helps me and others. I’m slowly telling more people. Everyone at Starbucks knows about it.

Regarding my condition, I will have to start over with a doctor and diagnosis. If the doctor agrees that I need the procedure and it is successful, then we hope to try IVF.

I have an appointment coming up with Dr. Robert Oates, whom I met at an infertility conference. [Dr. Oates is a male infertility specialist and Professor of Urology at Boston University School of Medicine and Vice Chairman of the Department of Urology.]

I hope sharing my story will help others realize that infertility is a medical issue, it’s not something that we choose, and it takes a toll. An emotional toll. I wish the military would treat it as an actual medical condition. It would help with the emotional roller coaster; I would perform better in every aspect of my life. It’s something that I am dealing with day in and day out, and pretending that everything’s fine when it’s not fine.

The military does offer a counselor on the base and I’ve spoken with her, but the guidance is not specific to fertility issues. Little things can trigger me and I go down into a black hole. And it always seems to be related to the fertility issues.

I hope I can help someone by sharing my experience.

I had felt that this was something I had to somehow deal with on my own. I didn’t know anyone else that was going through similar issues until I attended the Fertility Treatment, Donor Choices, and Adoption Conference in Newton, MA, in November 2017.

I am not sure what outcome my journey will have, but I do know that I have to try and live each day to the fullest without any regrets.

One thing this journey has taught me is that we have to chase our dreams no matter what. And I have to do whatever it takes to somehow accomplish my dreams, and whether I am successful or not, at least I will know that I gave it my all and won’t have any regrets.